LukeSports is proud to announce the addition of Ultimate Frisbee to our LukeSports programs in 2018.  This sport will be played at the same time as the Soccer program in the same location – Georgia Soccer Park.  Typically the schedule will be set up to allow for teams playing Soccer to also be able to play Ultimate games. Teams may wear the same uniforms created for Soccer.  If a team is not playing Soccer, all players must be identified by same color jersey. 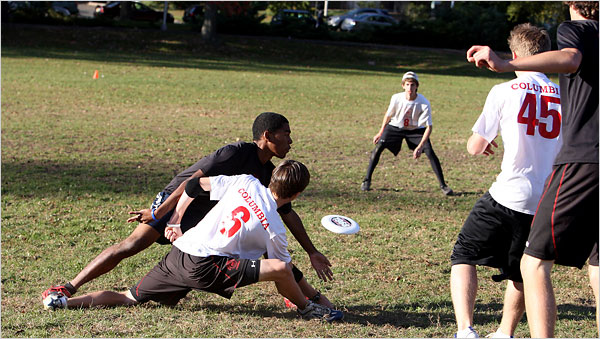 The game, explained as simply as possible

Ultimate is played between two teams of seven players on a large rectangular pitch. A line drawn across the pitch at either end creates two “end zones” (like in American Football). These are the goal-scoring areas. A goal is scored when a team completes a pass to a player standing (or more likely running) in the end zone they are attacking.

Players cannot run with the disc. When you get the disc you must come to a stop and try to throw it to another player (a bit like netball). By passing from player to player, the offense attempts to work the disc up the pitch towards the end-zone they are attacking. If the disc hits the ground or is intercepted or knocked down by the other team, then the opposition takes possession (a change of possession is called a “turnover”, like American Football). Possession also changes if a receiver is outside the playing area when he or she catches it.

The defending team attempts to stop the team with the disc from making progress up-field by marking them (as in soccer or basketball). The theory is that the offense won’t want to pass to a player who is being marked closely, as it’s likely to result in an interception. So it boils down to the offense players trying to get free of their markers to receive a pass, while the defense makes every effort to stay with them in the hope of forcing a turnover.

Fouls and “Spirit of the Game”

Ultimate is essentially non-contact; any contact between players can be declared a foul. There’s a variety of other minor violations, but that’s the big one.

Ultimate is unique in that it is typically refereed by the players themselves, even at World Championship level, according to a code of conduct known as “the Spirit of the Game”. This places the responsibility for fair play on the players themselves. However, LukeSports in it’s inaugural season, will have Observers acting as Referee’s overseeing the competition.

by Steve Courlang and Neal Dambra

The LukeSports Ultimate league will play the game based upon the following 10 simple rules.

These “Rules” are intended to help clarify the rules for novices. They are not intended for complete newcomers to the game (try Ultimate in 10 Simple Rules above), nor are they a replacement for reading the full rules.

Due to the non-officiated nature of Ultimate it is the players responsibility to have a reasonable understanding of the rules, these documents were intended to make the process of learning/teaching the rules easier.

They work best when introduced one at a time – perhaps over a series of weeks at practice or league.